This is my latest recording, (2015) a collection of ten songs I've written, track six I wrote with my eighty seven year old Mom! I play and sing everything except

This is my latest recording, (2015) a collection of ten songs I've written, track six I wrote with my eighty seven year old Mom! I play and sing everything except the drums and the dirty Harmonica on track ten. Please note: EAR CANDY for the headphone crowd! TURN IT UP!! Hope ya like it.

I'm writing this myself so just imagine I'm speaking personally to you. I'll spare you the hyperbole that comes with most entertainment biographies.
I call myself a "band guy", singer, bass player, guitar player, songwriter . I always tell folks "If it makes noise I'll bang on it".
Mostly interested in American roots music which covers a large swath of stylistic real estate, blues, soul, gospel, r&b, classic country and pop to metal. I do have a soft spot for Cuban and west African music but I don't try to play it!
At this time in my life I'm unapologetic about my age... "OLD" in terms of the entertainment industry, just turned fifty six in September 2014, I'm one of the youngest old men you will ever meet. I'm sixteen goin' on sixty, It used to be fourteen goin' on forty... And so it goes.
Swimming somewhere in the middle of the boomer pool I came to grips some time ago that I play music for "old" people. Not that young people don't like it, because they DO! I can attest of my unique perspective from the bandstand when the band is ON, I don't care how old you are. It moves you, I see it all the time.  Why? Because the themes therein ring true! Life is hard sometimes love, loss, heart and soul are timeless... Ahhh jeez I'm rambling.. This is supposed to be a Bio right? It's late, ok?!
Actually 3:52 in the a.m. I'm just starting to wind down.
Below are two versions of the bio info, SHORT FORM is like a regular bio, LONG FORM form is the start of my memoirs.

I started singing and playing music as a kid in church. By the late 70s after High School I got Rock & Roll fever and I still suffer to this day.
Sniffing many styles from Blues, Pop, Rock, R&B, Country, Southern Rock, Metal, Punk, Funk, Jazz, even Gospel. Master of none, part time purveyor of all. I have worn many hats both musical and technical. From front of house/monitor tech, stage hand, guitar tech (Skeletons, Dave Alvin), follow spot operator to videographer, graphic designer and tabloid publisher.
On my latest recording DOUBLE NICKEL, I exploit a wide pallet of different instruments and sounds, played and sang all the tracks except for the drums. "My recording engineer SAM PLATT is an excellent drummer and really fast at those tools the pros use".  Jimmie Meade adds a fantastic dirty harmonica track on "American Dream?" that was recorded a few years back for a compilation CD put together by Sam. I liked the way we worked together and that is what gave me the idea to do DOUBLE NICKEL with just myself and Sam.
I have had the pleasure of being the bass player/singer and co front man of LEVEE TOWN along side Blues guitar virtuoso BRANDON HUDSPETH the KC Blues/Boogie act has been grinding for going on FOURTEEN years now, along with JIMMIE MEADE on Blues Harp and ADAM HAGERMAN on Drums. I also handle the guitar & singing beside phenomenal trumpeter PETE CARROL in the funk soul blues infused JamBaLiars. "The LIARS" include Hagerman on drums and CLIFF MOORE on bass. My Double Nickel Trio is a more guitar centric version of the LIARS. I also show up with THE NARIES on occasion to rock out with GREG KRUTSINGER, we toured the MissoNaries for years around the midwest, I have been saying lately "We were Alt before Alt was Alt!" Quintessential party band were the MissioNaries, look for new music from all of my ventures soon!

As I stated on the cover page of this website I grew up in northeast Oklahoma on Route 66 and spent a lot of time in and around a small Southern Baptist church that had a huge impact in my life both musically and spiritually. Ruth Ann, my Mother, God bless her soul was the janitor for a while so we were there EVERY day. Not that's a bad thing... She and these two other ladies sang in a trio almost every Sunday and they got the call for nearly every funeral. I remember sitting in the church pew mesmerized by Johnny Smith (no relation to Jimmie the Jazz great) kickin' the bass pedals on the organ... "I wanna do that"... So I took piano lessons from him for a while because the local organ teacher wouldn't take beginners.. So after a while Johnny went off to school & I started with Douglas Payton, a good teacher, a patient man, kind to me but like any teacher he could tell I never practiced. I could hear it and play it much easier than I could read it and play it.... Then came, DIRT BIKES!

A few years later Colby Allen came out to the house and said, "Hey we're putting a band together. Wanna be our bass player?" YEAH SURE! That was Garage band #1. House of the rising sun till the cows come home... I know there was a GB#2 but I just can't remember. Anyway...

I've been playing in bands since I was about eighteen, typical garage rock cover bands, grinding on the same hand full of tunes to get ready for the prom party. ZZ Top, Led Zep, Stones etc. But by Garage band #3 (I wish I could remember the name!) these guys hipped me to The Ramones, NY Dolls, I was like.. What is this?! It's new yet old in a way...
I had graduated high school but some of the other guys in the band were still in so we played their Sr. talent show.
There was another band in school, younger guys, sophomores I guess. These guys could really play well beyond their years. At the talent show they were pitchin' pennies at us because we did the Stones version of Jumpin' Jack Flash instead of Johnny Winter's. Well they were just too hip because Tim Thomas' older brother Terry and all his friends jammed and hung out with CRAWDAD, Steve Gaines' band before he took the Lynyrd Skynyrd gig.

By this time my Grandma's antique shop had become my domain. One night Slugger Trask, his wife at the time and their pit bulls came out and frightened us but at the same time he taught us Roots Rock Reggae by Bob Marley and a couple of other songs. I knew Slugger and his brother Skip since Sunday School days but he had gone to the Army, He was stationed in Korea and came back a little different, not because of combat. This was in the seventies, He was a trombone player in the Army band and I think he was up to "other" things most of the time. He is passed now, I always loved that guy. I would play a lot of music with him later.

A while after that I took the gig with the younger guys, the penny pitchers. We called the band RED BUD, Tim Thomas, Mike Phillips, Jeff Smith, Scott Rutherford and myself. You can read into that name what you want. Yeah, not the tree. We played some parties and a few club dates.  Back in the last century it was not so hard to get into clubs and play when you were underage.... More to come soon, I promise! This has barely started :-) 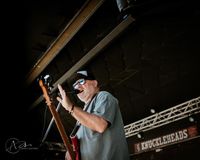